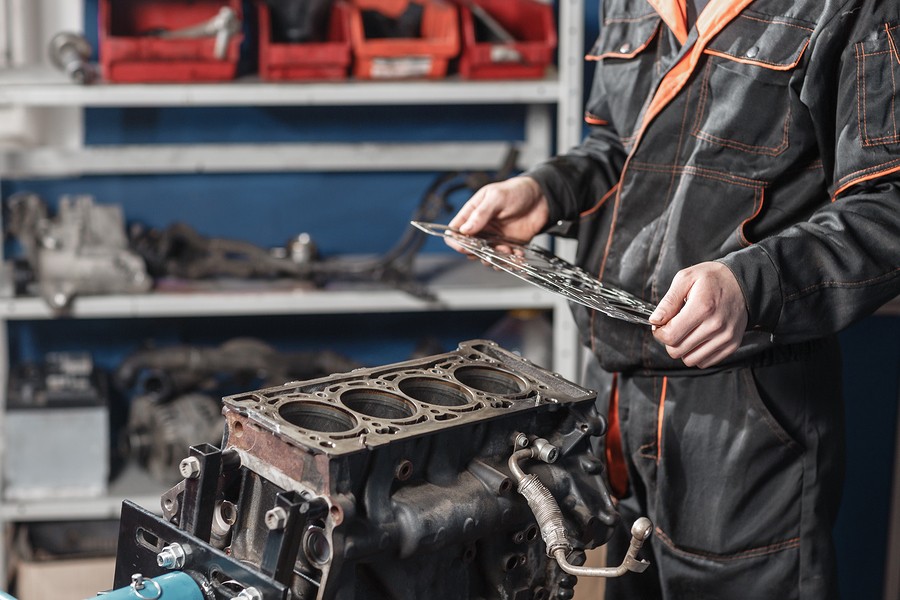 The Subaru brand is a reliable and trustworthy car brand that has been popular for numerous decades. Subaru has a loyal customer base that keeps coming back year after year. However, the 2.5 liter engines are extremely notorious and susceptible to head gaskets leaking. The problems initiated during the early 1990’s and have been prevalent in models for around 10 years after the inception.

What Is A Head Gasket?

A head gasket is a thin strip of metal with various holes punched through it. The gaskets get placed between the block and cylinder heads during the assembly process. The job of the head gasket is to absorb the energy between the two metal components near the engine. The gaskets are in charge of keeping the oil in the right oil passages, and keeping the coolant in the correct coolant lanes.

Head gaskets are also supposed to be the last line of the engine, and should only really require replacement with major internal auto body work happening. The head gasket works directly with the engine, shifting in position as the engine fluxuates in temperatures between heating and cooling functions. The head and block must gain and let go of heat at various rates of pressure being put on the seals.

When the head gasket fails, the engine no longer is able to contain the pressures that have built inside. The explosive forces are then trapped in places within the engine that they shouldn’t be – this means that oil and coolant drifts into the wrong places as well.

If you have an older Subaru model with a blown head gasket, then your engine faces a risk of overheating when compared to a newer model Subaru. When the head gasket materials start to break down over time and begin to erode, you should be able to notice some or all of the tell-tale symptoms that your Subaru has a blown head gasket.

One of the symptoms of a blown head gasket in a Subaru is white exhaust leaking from the tailpipe. White diesel smoke is the product of being caused by a lack of heat in the combustion chamber, which means that the fuel is not being burned correctly and at the right proportion.

In some instances, the white smoke in diesel Subarus can be caused by a damaged or partially-clogged fuel filter, faulty injector timing, or contaminants within the diesel. In Subaru petrol cars, the white smoke can be a sign of burning coolant, black smoke due to oil burning inside, a broken catalytic converter, or complete engine failure.

Other symptoms of a blown Subaru head gasket is white oil in the reservoir, your engine overheating, exhaust bubbles and vapors in your coolant reservoir, and your vehicle overheating in various driving conditions. If the seals rupture at the cooling jackets, then the extra exhaust and heat produced can be very detrimental to your vehicle.

The newer head gaskets on newer-model cars can do a better job of containing internal leaks than the older models, but they don’t prevent any leaks in the fluid passages. If this is happening in your Subaru head gasket, then you may experience the following signs:

When Did The Subaru Head Gasket Problems Start?

The Subaru head gasket issues have been known to affect a large number of Subaru models and makes throughout various years. The most commonly affected models are the Impreza, the Legacy, and the Outback models between the years of 1999-2004. The main reason that they have the issues is because they share the 2.5-liter SOHC engine. This engine causes overheating, loss of coolant, and black-colored coolant in the recovery chamber.

Although any internal combustion engine might undergo a head gasket failure, Subaru’s specific models are more susceptible to the issue and more known for having this issue frequently occur in many of their models. The breakdown of the affected models are the Subaru Forester from 1999-2010, Impreza from 1999 to 2011, Outback from 2000-2011, Legacy from 2000-2009, and Baja from 2003-2005.

The engines that are within these cars are considered boxer-style engines. These motors lay flat and the pistons move laterally, balancing weight accurately and quickly. They sit lower in the vehicle for an improved handling, but fluids have a likelihood to pool next to the head gaskets. This can cause acid in the fluids to erode the seals.

The first generation Subaru 2.5-ilter engine usually gives certain signs and symptoms that the head gasket has blown. There is an oily residue in the overflow bottle, in addition to an exhaust fuel, or sulfur smell in the bottle. After you notice this symptom, you will typically be able to read a higher temperature gauge reading, intermittent overheating, and overheating that occurs more frequently during long trips.

Tips On How To Decrease The Chance Of Failure

There are various ways that you can decrease the chance of your head gasket failing when it comes to your Subaru cars. These tips can increase the lifespan of your Subaru, keep it working in a functioning condition, and prevent the head gasket problems.

The process of what is supposed to happen is that when engine oil gets to a proper temperature, the fuel will evaporate into the intake manifold where it mixes with the air going into the combustion chamber. However, this doesn’t always happen due to certain situations with your car and driving distances. Changing your engine oil reduces the risk that your engine fuel will leak into the wrong places.

Second, you need to keep an eye on your Subaru’s battery in order to prevent a blown head gasket or head gasket problems. Batteries typically last for 3-5 years before they begin to leak a significant amount of acid. During normal situations, the battery’s role is to power accessories when the vehicle is not on, and to start the vehicle before running.

Most Subaru owners drive their vehicles with all of the accessories on and functioning. However, sometimes the alternator cannot withstand the load, and power is drained from the battery. The battery is very close to the radiator and part of the electrical system in the car – this can influence the voltage in the cooling system, which might make coolant corrosive as a result.

A battery that is not properly taken care of and covered in battery acid will lead to corrosion in the cooling system. The corrosion will eat away at the head gaskets, seals, and metal. On the second generation engine in the Subaru, this typically occurs at the head gasket on the left-hand side. The battery leaking acid can cause Subaru head gasket problems.

Third, you should start changing the coolant in your Subaru on a regular basis. The coolant can become corrosive and deteriorate seals and gaskets if you don’t change the coolant regularly. The use of antifreeze that is recommended by Subaru or a Subaru technician can help second-generation engines.

Fourth, make sure you are knowledgeable of the parts and services that have been implemented into your Subaru. For example, you should use spark plugs and specific parts that were designed for Subaru models. The combustion temperatures can be negatively affected by non original equipment, causing Subaru head gasket problems.

Lastly, make sure that you have the vehicle inspected by someone who is a license and authorized Subaru specialist or technician. Bringing your car in to be checked by a specialist means that you can ensure you have the best care for your car, and that there will be a prevention of Subaru head gasket problems.

The Cost Of Fixing A Subaru Head Gasket

Unfortunately for those car-owners who have a Subaru with a problematic head gasket in the aforementioned years, the repair can cost upwards of around $1,500 – just for the labor. Some shops try to take advantage of Subaru owners and charge almost $5,000 for the complete fix, due to needing other remedies like a timing belt replacement.

Even so, the cost of fixing a Subaru head gasket depends on the year and configuration of your Subaru with the 2.5-liter engine. Usually, the base head gasket for parts costs between $1,100-$1,200. When you add in other items like the idlers, tensioners, seals, water pump, and timing belt, it can add around $700 to your bill. The usual cost for a Subaru with automatic transmission is between $2,500-$2,700. The usual head gasket repair on a manual car is a little pricier, coming in at around $300-$500 more expensive.

The repair of a Subaru head gasket will take approximately 2 days when you take it to a technician. This gives the specialist time to repair and road test the vehicle. They usually do a recheck after the road test to ensure the head gasket is running smoothly and the vehicle is safe to return to the owner.

What If My Car Isn’t Even Worth Getting Fixed?

If you feel like your car isn’t worth the energy, then you shouldn’t pay thousands of dollars for the repaired head gasket. Since the procedure costs over $2,000 for an automatic or manual car, you need to determine if that financial commitment is worth it for your specific vehicle. If you have an older vehicle that you aren’t confident is going to run smoothly for much longer, you might want to consider turning your car in for junk to CashCarsBuyer.

CashCarsBuyer can buy your used car and give you quick cash in return. You just have to remove all of the non-metal components before turning the car in – and don’t worry, you can sell these for extra money as well. Come to CashCarsBuyer with your Subaru Outback and earn some money to put towards your next vehicle!