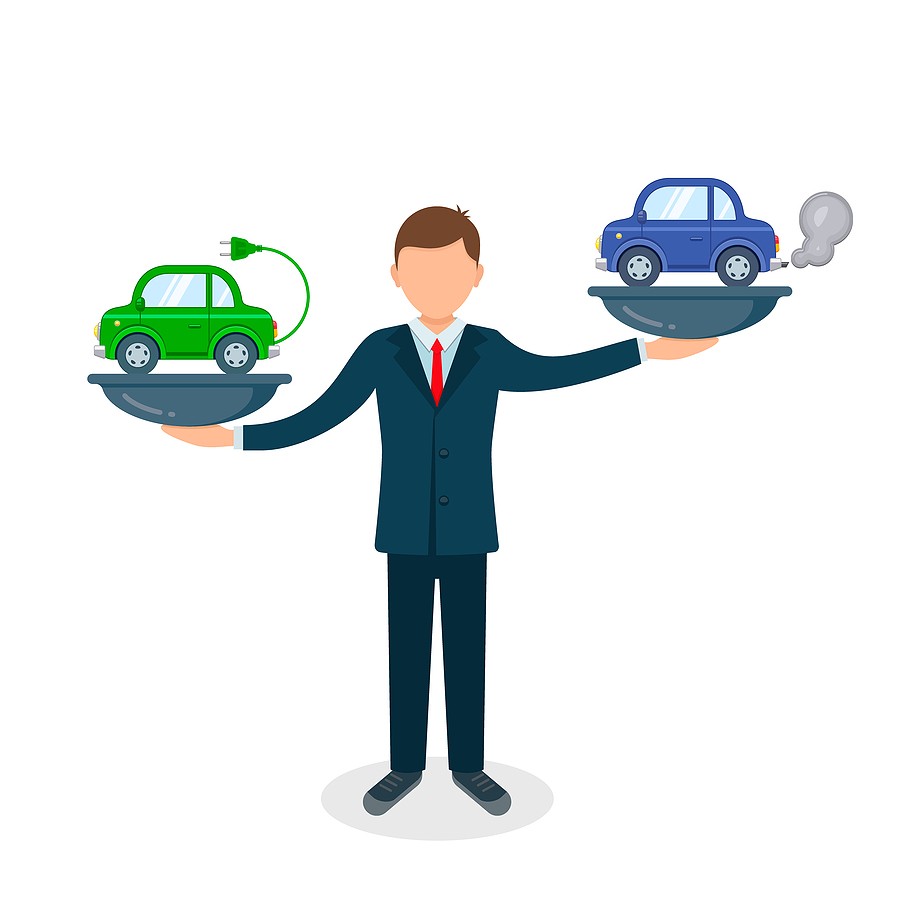 The average driver probably doesn't know much of the difference between diesel fuel and gasoline. Nearly every gas station you go to is going to have both available, but since the average car on the road runs on gasoline most drivers tend to ignore the diesel pumps. If anything, you likely think of these as where big trucks fill up.

While it's true that most large trucks such as 18-wheelers as well as farm equipment run on diesel fuel, the reason why trucks use diesel and cars use gasoline is just something that is never explained to most drivers. So, let's take a look at the difference between diesel and gasoline and dive into why exactly diesel is actually the superior fuel when it comes to powering a vehicle.

What is the Difference Between Diesel and Gasoline?

A number of European and Asian automakers are now making diesel vehicles for the American market. It's becoming more and more reasonable for the average driver to actually look into the benefits of diesel vs gasoline. Companies like Subaru, Volkswagen, Audi and others currently sell cars in the United States that run on diesel fuel. Across the pond in Europe diesel accounts for about half the passenger car market. That could become a trend in the United States as well, especially if people learned just how efficient a fuel diesel really is.

Diesel engines as well as traditional gasoline-powered engines both work in a similar manner. They're both internal combustion engines which means that the fuel needs to ignite to move the pistons, turn the crankshaft, and in turn cause the wheels of your vehicle to rotate letting you move. The method by which this happens is a little different from gasoline to diesel, however.

The way the fuel ignites in a diesel engine is not the same as the way it ignites in a traditional gasoline engine. Your gasoline powered engine has spark plugs in it. When the fuel and air mixture is sprayed into the combustion chamber of your vehicle, your spark plug creates a spark which ignites the fuel and air mixture causing combustion. That's what pushes your piston down, that's what rotates the crankshaft.

In a diesel engine spark plugs are not part of the process of causing combustion. Instead, extreme compression is used to generate the heat that will then result in a spontaneous ignition of the fuel. This is called compression ignition. If this happened in your normal gasoline engine, it could cause severe damage.

In general, diesel engines don't have spark plugs, but they may have glow plugs which are kind of like spark plugs that are only used for extremely low temperatures to lend a hand for the compression-ignition reaction to occur.

Why is Diesel More Powerful Than Gas?

It surprises some drivers to learn that diesel fuel is more efficient and more powerful than standard gasoline when it comes to fuelling a vehicle. Diesel fuel is produced by distilling crude oil and ends up being far denser than gasoline. The boiling point of diesel is higher than water and it has a lower evaporation point compared to gasoline which will evaporate at room temperature.

One gallon of diesel fuel produces 155 x 10 to the 6th power joules of energy. That equals 147,000 BTUs for every gallon. You can compare that to gasoline which produces 132 x 10 to the 6 power joules of energy. That works out to 125,000 BTUs. You also need to mix gasoline with ethanol to achieve this level of energy production because ethanol increases the energy efficiency of gasoline. So, you're still falling behind using gasoline compared to diesel fuel.

Diesel engines are two stroke or four stroke engines which means that the pistons have to make two strokes or four strokes before combustion is going to occur. The strokes are longer in a diesel engine than they are in a gasoline engine as well. Combine that with the compression and the heat and pressure of the fuel, and diesel is able to push a vehicle at greater speeds than a simple gasoline engine can. This also means that a diesel engine is able to produce greater torque. And that is the reason why vehicles like 18-wheelers and farm equipment specifically used diesel over regular gasoline. That torque is incredibly important for working vehicles.

Just as an aside, in case you're wondering, torque is necessary for a vehicle like a truck because it is the twisting force that causes rotation in the wheels.  Torque is also the rotation of the pistons in the engine. With constant fuel injection torque is allowed to continue and build for improved performance. Torque and horsepower are not the same thing, but torque is what is responsible for the force of your wheels that makes your car more reactive. Higher torque vehicles can accelerate faster, but it also means a heavier vehicle is able to get moving and keep moving more easily.

How is Diesel Fuel Economy?

Diesel fuel offers you superior gas mileage when compared with gasoline. You'll get about 25% to 30% more fuel economy out of a diesel engine then a similarly performing gasoline engine. In fact, a diesel engine is more efficient than most gas-electric hybrid engines.

When you head to the gas station, you'll also notice that diesel fuel is often cheaper than gasoline. These days you can't rely on that to be a hard-and-fast rule, however. Some years ago, it was pretty standard across the country that if you were pulling in to gas up, diesel fuel would be far cheaper than gasoline. These days there are occasions when diesel is actually a few cents more expensive per gallon than gasoline, however for the most part it's still a cheaper fuel. Factor in that fuel economy, and it's still a better option for most engines.

Why Don't More Engines Use Diesel Fuel Instead of Gasoline?

With all the benefits of diesel fuel you might be wondering why anything runs on gasoline at all. There are a few reasons why diesel engines never caught on as well as their gasoline counterparts in the United States. To start with, because of their compression ratios compared to gasoline engines, a diesel engine is a lot heavier than a gasoline engine. When trying to cut down on bulky vehicles, lighter engines are often seen as a benefit in terms of performance and efficiency.

Diesel engines are often more expensive overall than a gasoline engine is and for a long time diesel engines were considered to be less environmentally friendly than gasoline-powered engines. Diesel fuel contains a lot of sulphur back in the day, which heavily contributed to that reputation of those big, smelly trucks on the highway belching out thick smoke from their exhaust. Sulphur in gasoline ends up creating a kind of rotten egg smell, however standards have changed over the years and the amount of sulphur that is legally allowed in diesel fuel is near zero these days. That means modern diesel  engines are much safer and produce fewer emissions than in the past.

Any engine can be difficult to get started in cold weather, but diesel does have a bad reputation for struggling when the temperature drops too low. That's why glow plugs are sometimes included in diesel engines to help the combustion reaction along. That also means that when you want to start a diesel engine on a cold morning you might need to wait a short time for those glow plugs to warm up before the engine starts. The reason for this is that, depending on the kind of diesel fuel you use, and there are a few kinds like diesel 1 and diesel 2, it can thicken up a little bit in the cold weather and perform much less efficiently.

Finally, diesel fuel as we've seen really excels at keeping a vehicle going for the long haul rather than short drives. Cars tend to use diesel less efficiently than big trucks do, so it never really caught on as a passenger fuel from back in the day.

That said, with improvements in diesel engines and in the fuel itself that cut back on emissions, modern cars that have diesel engines are definitely a viable choice these days and can save you a lot of money.

In general, a diesel engine is more durable than a gasoline power engine and will actually perform longer and more reliably than a gasoline engine will. That means it requires less maintenance, which in turn means fewer repair bills for you. The trade off for this is that if you do need some repairs done to your engine it might end up costing you quite a bit more at a mechanic than the same repair would in a gasoline powered engine. So, it really is a bit of a balancing act to determine whether it's still a better idea to choose a diesel engine over a gasoline engine in terms of costs.

Diesel engines have fewer components than gasoline engines which means that there's fewer things that can go wrong. That's part of the reason they will last longer. If you have fewer things to break, it makes sense that fewer things are going to break.  Factor in all the improvements that have been made on diesel compared to the stereotype from the 60s and the 70s that most people still seem to have about why they're not ideal for cars, and a diesel engine really does come out ahead.

Even though vehicles that run on diesel are not commonplace in the United States by any means, there are a lot of reasons you might want to consider looking at a diesel-powered vehicle in the future. If you're considering it right now, it's worth noting that the advantages arguably outweigh any potential disadvantages that you're going to experience.

In simple fuel terms, the most inconvenient thing you're going to have to deal with when it comes to diesel is the very inconsistent price of the fuel because it does tend to fluctuate above and below the price of gasoline from day to day. But the fact is that diesel fuel is far more efficient than using gasoline when it comes to power in a vehicle. Each gallon of diesel fuel provides more power than what you're going to get from standard gasoline so even if the price fluctuates a few cents above traditional gasoline the remarkable fuel economy and efficiency that you're getting when you use diesel balances out the equation and then some in your favour.

If the opportunity arises for you to pick up a vehicle that runs on diesel as opposed to gasoline, it's probably worth your time to consider buying it if you could get it at a reasonable price. Dollar-for-dollar, a diesel-powered vehicle is going to be a better option than a gasoline-powered vehicle.

This may not have been true even five or ten years ago but the technology, especially thanks to the innovations made by the European automakers that are heavily pushing out diesel powered vehicles and have improved the design and function of the engines overall, means that diesel really is a better option than gasoline these days